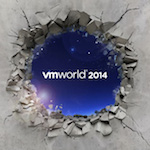 First up Carl introduces Martin Heisig from SAP for a bit of a Chinwag™. They run over 70,000 VMs with a virtualisation rate of over 85%. A key use case for SAP is the 20,000 training users who have access to an on-demand training platform, bringing up and tearing down VMs constantly. Similarly their dev environment, referred to as “The Zoo”, consists of over 30,000 VMs. SAP have reduced deployment times for new platforms from 72 hours to 30 mins, sometimes rebuilding all 30,000 machines in the space of only a month. As Dave Simpson tweeted, “that’s some big numbers right there”! Of course most customers are nowhere near this size, but it definitely gives you ideas as to the kind of things achievable on the platform.

SAP recently certified SAP HANA on vSphere with up to 1TB of RAM. That’s pretty decent scale! Martin mentions vCloud Air in passing. I wonder how long it will be before we get HANAaaS on vCloud Air?

Vodafone’s Tom Stockwell (Head of Hosting Product Management) represents the next customer use case, with their new Hybrid Cloud solution for Enterprises. Vodafone chose VMware in part due to the user community supporting their software. The acquisitive VMware strategy with companies like Nicira and Dynamic Ops was also a key element. Their hybrid platform is based on a number of technologies including NSX, vCD and VCAC.

Summarising the last 30 minutes, Carl states that the SDDC is the Architecture for the Hybrid Cloud.

Next on stage is Raghu Raghuram (Executive VP, SDDC). He starts by a current status on VSAN, NSX and vRealize Suite. All you need is a bunch of commodity servers now, and you “pour” the VMware management software on top.

Raghu invites “Chief Powerpoint Officer” Ben Fathi (CTO) on stage to talk about EVO:RAIL and it’s 15 minute deployment time. For more info on EVO:RAIL see my previous post with links to loads of great official and community content. He goes on to talk about EVO:RACK which includes the entire vCloud Suite, VSAN and NSX included, and has a build time from about 2 hours.

Raghu now addresses the subject of vendor lock in, with VMware’s answer being the use of VIO (VMware Integrated OpenStack). Ben demos how VIO deployment is integrated into the vSphere Web Client, which lets you manage all the common operational elements for OpenStack (e.g. Nova, Glance etc). The integration with vRealize Operations Manager looks pretty cool, letting you drill down into the tenants on the OpenStack platform, among other things.

Raghu then starts to discuss some of the vSphere Beta improvements, starting with SMPFT. This allows you to protect VMs with up to 4vCPUs. This will be great for highly critical services which may not have application layer HA. The element many people would want to protect most is vCenter, but I have heard mixed messaging as to whether this is actually recommended. VMware have some announcements coming around providing HA for vCenter (potentially natively).

Ben’s is back on the Powerpoint clicker, talking about Cloud-Native Applications, typically fault tolerant applications built across containers. Docker augmented the standard Linux LXC container with a simplified interface for building, deploying and transporting these containers. VMware believe you can get the best of both worlds running containers inside VMs, so you can augment your platforms with the flexibility of the VMware ecosystem around things like isolation, ops management, SDN through NSX, etc. VMware have also been working with Google to ensure Kubernetes integration with VMware. VMware have published a blog this morning comparing containers on bare metal vs using VMware and found the typical overhead to be 3% or less.

vRealize Code Stream is designed to help with the release process from dev to prod. Ben demos vRealize Automation’s “Release Automation” feature which lets you drill into a pipeline of functional testing, system integration testing, staging and prod, and the results for each stage of the development lifecycle.

Next, Policy Management, and a demo on the vRealize Automation Center. A set of networking, security and storage policies have been associated to a demo application. Based on the attachment of the policy blueprints, the VMs under the application will be remediated to meet the applied policy. An example of this would be to apply a Silver storage policy which happens to have a certain performance profile and a number of failures to tolerate (how many copies of the data on VSAN). Once these policies are in place (which will take some work in your environment to define), you can simply then assign apps and VMs to policies, and consumers don’t need to worry about the details on how this works.

NSX Microsegmentation is covered next. This is a brilliant technology as it allows you to effectively firewall VMs within the same security zone. Working for a service provider, this opens up many more options on how we architect multitenant and public cloud solutions. It’s definitely a driver for NSX adoption, even if you ignore all of the other features!

Simone Brunozzi (VP and Chief Technologist, Hybrid Cloud) comes on to demo an interesting use of APIs; sending alerts to Google Glass! He then demos extending an application out into vCloud Air. This was done by extending the L2 network out to vCloud Air using VXLAN and NSX. Simone confirms that one of the most popular vCloud Air products today is DR-as-a-Service, based on vSphere Replication.

So overall, no real announcements in todays keynote, mainly just reiteration of messaging and focus on demoing the path from a standard virtual platform, to an automated, orchestrated SDDC, with vCloud Air burstability and DR! If you have time to, and want to see these demos, I would recommend watching the keynote replay and jumping to about 30 minutes-ish, when this section starts.