Yet MORE Intel NUC Models on the way for your Nanolab!

For those of you who are regular followers of my blog, you will know I am a great proponent of the Intel NUC range for their low noise, low power, low(ish) cost, high performance and most importantly high WAF (Wife Acceptance Factor) features!

Unbelievably having only just announced their second generation triumvirate of models just 2 months ago (and due out in a couple of weeks), they’re at it again, announcing a third generation already! The new models include a pair of Haswell-based “Wilson Canyon” Core i3 / Core i5 processor options, featuring up to 4 USB 3.0 ports and a full size SATA connector and are expected to land some time around Q3 this year.

I have updated the CPU table with the currently available info on the new models, and will add CPU benchmarks once available on www.cpubenchmark.net (for consistency). This also includes the recently leaked specs for the new Gen 8 HP Microservers based on Intel Pentium / Celeron processors.

IMHO you cant beat the NUC for its price / performance / noise features mentioned above. In an ideal world I would be happy to give up 2-3cm of extra board size to get some extra RAM slots and a second gig port on the VMware HCL in there, but as a tidy home lab solution they’re hard to beat!

As regards this latest batch of models, I personally still think the sweet spot is with the Intel Core i5-3427U DC53427HYE 2nd Gen model, which includes vPro for remote access, and will turbo to a handsome 2.8GHz for as little as ~£235 when I last checked. More than enough for most home lab requirements! 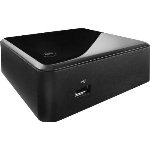