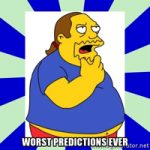 At this time of year, it is customary to look back at the past 12 months and make some random or not-so-random guesses as to what will happen over the coming 12. As such, what could be more fitting for my final post of 2016?!

Here’s a few of my personal best, worst, and easy guess candidates for 2017…

Come on Alex, even Penfold could have predicted these!

Its on the cards… maybe?

These probably won’t happen, but if any of them do, I’ll claim smugly that I knew they were always going to!

Here’s wishing you all an awesome, fun and prosperous 2017!

Following on from my previous AWS exam experience post for the AWS Certified Developer Associate (CDA) exam from Amazon, the following describes the study materials I used towards the exam.

For a really full picture of all of the materials I’ve used over the last 12 months, I highly recommend you check out the Certified Solution Architect Associate exam experience and the Certified Solution Architect Associate study guides, along with a number of tips, tricks and gotchas I have posted over the past few months. I also did a podcast recently with Scott Lowe on the subject of learning AWS. If you are new to AWS, I highly recommend you check it out!

Whilst studying for the exam, I used the following study materials:

Don’t forget to check out my other AWS articles tips here: